The American Civil War, which lasted from 1861 to 1865, was a pivotal moment in the history of the United States. The conflict arose from deep divisions between the industrialized Northern states and the agrarian Southern states, with the issue of slavery at the forefront. The North gradually abolished slavery, while the South became increasingly committed to it as a cornerstone of their economy. As a result, tensions between the two regions grew, leading to a series of crises and ultimately, war.

The Role of Slavery in the Divide between North and South

One of the major factors that contributed to the outbreak of the Civil War was the question of whether newly acquired Western territories should be free or slave states. This issue came to a head in 1849 when California applied to join the Union as a free state, which would have disrupted the balance established by the Missouri Compromise of 1820. Efforts to find a compromise, such as the Compromise of 1850, failed to resolve the conflict, and instead only served to further enflame tensions between the North and South.

Another key factor was the passage of the Fugitive Slave Act of 1850, which strengthened federal laws that required local governments to return escaped slaves to their owners and imposed penalties on anyone who aided in their escape. This law was deeply unpopular in the North and led to widespread protests, including the arrest of a Black man named Anthony Burns in 1854, which sparked a massive demonstration in Boston. This event further radicalized Northern abolitionists, who began pushing for “personal liberty” laws to make it more difficult for enslavers to reclaim their property.

In addition to these political and legal issues, economic, social, and cultural factors also contributed to the outbreak of the Civil War. The North and South had become increasingly separate, with different economies, cultures, and ways of life. These differences, combined with the growing divide over slavery, ultimately led to the outbreak of war in 1861.

The Impact of the Civil War on the Political, Economic, and Social Landscape of the United States

It is worth mentioning that the American Civil War was one of the deadliest conflicts in American history, with an estimated 620,000 soldiers and an unknown number of civilians losing their lives. The war also had a profound impact on the nation, leading to the abolition of slavery, the destruction of the Southern economy, and the reshaping of the United States into a more industrialized and powerful nation.

The Civil War also had a significant impact on the political landscape of the United States. The war resulted in the defeat of the Confederacy and the abolition of slavery, which had been a contentious issue for decades. This led to the 13th, 14th, and 15th Amendments to the Constitution, which abolished slavery, granted citizenship and equal protection under the law to African Americans and gave African American men the right to vote, respectively.

The war also led to the rise of the Republican Party, which had been formed in opposition to the expansion of slavery, and the decline of the Whig Party. The Republicans, led by President Abraham Lincoln, were able to capitalize on the victory in the Civil War and the abolition of slavery to gain political power and dominate the country for the next several decades.

The Civil War also had a significant impact on the economy of the United States. The destruction caused by the war, especially in the South, was extensive and the rebuilding process took many years. The Southern economy, which had been largely based on agriculture and the labor of enslaved people, was in shambles, and it took many years for it to recover. The North, however, experienced a boom in industry and commerce, which helped to solidify its position as the dominant economic power in the country.

In conclusion, the American Civil War was a defining moment in the history of the United States. The war was a result of deep divisions between the North and South over the issue of slavery, and it had a profound impact on the nation, leading to the abolition of slavery, the reshaping of the political landscape, and the emergence of the United States as a more industrialized and powerful nation.

The legacy of the Civil War continues to be felt to this day, as the issues that led to the war, such as race relations and economic inequality, continue to be major concerns in the United States. 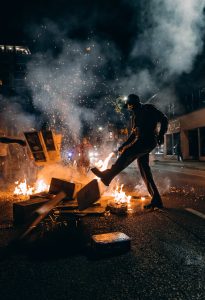 The Top 5 Most Violent Revolutions in History